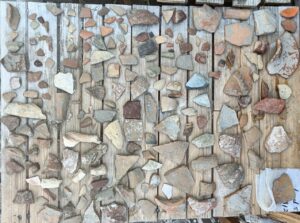 Besides an excessive amount of pottery and terracotta, our team also finds numerous limestone fragments. In our disco ball section (see previous post), the first ever inscription on a limestone base, not yet fully unraveled, was found, which caused great joy among us excavators. 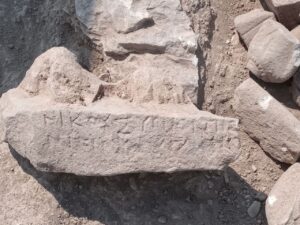 In the section with the architectural structures, these being walls, a quite significant find was also made. In a layer above one of the walls, several fragments of a unknown vessel made of coarse, dark red clay, were found. After washing the fragments, it was possible to put them together and reconstruct a vessel that is two-thirds complete. The vessel is probably a so-called bótis, a thick-walled jug with three feet, a handle and incised or roller-stamped geometric patterns running over a large part of the jug. This is not an ancient find, but still gives us a lot of information about the excavation activities before our excavation today. 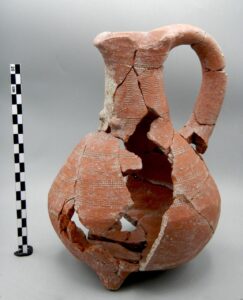 After some research by Prof. Dr. Schmid, the twin piece of our jug was found in the Volkskundemuseum in Vienna and thus the determination was certain and an approximate dating was possible. The find in Vienna is a jug from Cyprus, which is dated approximately in the period 1870-1890, so we assume roughly the same period for our jug. The most interesting part, however, is that the jug comes from the collection of Max Ohnefalsch-Richter and thus allows the conclusion that the bótis found in our section might also be connected with him and that we are actually excavating something that was already dug out of the ground at an earlier time. The jug even admits at least an approximate time for this and confirms the assumptions about Ohnefalsch-Richter’s activities at exactly our modern cut.

Likewise, the robbery hole from the nearby cut, allows the conclusion of post-ancient activities.

Besides the many interesting finds, there were also the first group photos taken with the drone in this year’s blue excavation shirts and our newly gifted green Carlsberg T-shirts, with which of course dramatic photos on our overburden pile could not be missing.