While on the one hand we had to say goodbye to two excavators from our team, on the other hand we were pleased to welcome our reinforcement from Sorrent to the team. This also brings into our midst a practice that is becoming more and more important and adapted to archaeology, the creation of 3D models. With the models created during the last two weeks, it will be possible later, when the team is back in Germany, to access data that simple photographs or drawings do not really show to advantage. For example, information from a planum that has already been excavated can be accessed, or objects that have been scanned can still be viewed better and from all directions. Of course, the found objects remain on Cyprus and so a later and exact recourse from the home country is nevertheless partly very practical.

Here a modell of one of our walls, built out of about 300 pictures.

For these 3D models, our Sorrentine hops light-footedly and on socks, so as not to destroy the cleaned surface, over our cleaned planum and skillfully takes hundreds of photos, from which he later constructs a practical model. Similarly with modeled objects, circles are diligently drawn around them, so that it must be feared that they will soon be run into the ground. Of course, this is just to map out every millimeter so that the model ends up being as accurate as possible.

And here a modell of the inscription, we talked about in the previous post.

The week is rounded off with a weekend of findings work, which consists of washing ceramics, brushing limestone, gluing terracotta and all counting and weighing. 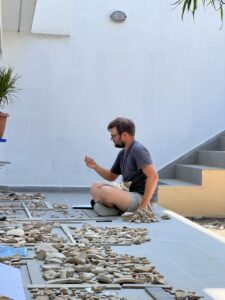 Our reinforcement from Sorrent working with the finds.

Our team casting shadows frantically, for the creation of 3D models.