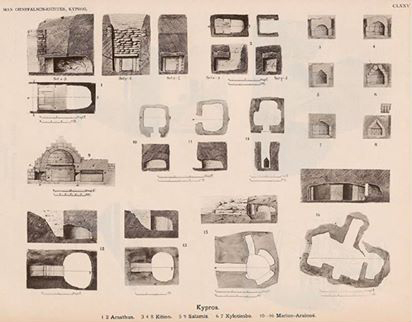 As is widely known, Max Ohnefalsch-Richter (1850-1917) did excavate or investigate a series of built chamber tombs in Cyprus. In his opus magnum „Kypros, the Bible and Homer“ (London 1893), he published a plate with most of these tombs. Interestingly, he did not integrate there a series of built chamber tombs he had excavated at Idalion. These are described and partially illustrated in his manuscript „Tamassos und Idalion“ that was supposed to be published by himself and a series of collaborators, Robert Zahn being the last one of them. Since this publication never appeared, the information about these monuments is presently lost for scientific research.
In this presentation these monuments will be presented and localised in the funerary landscape of ancient Idalion. Thanks to precise plans by Ohnefalsch-Richter, a rather clear picture of the necropoleis of Idalion arises. Further, we will discuss their chronology. The excavator himself dated most of them to the Hellenistic period but according to the present state of knowledge, it cannot be excluded that they should belong to the classical or even archaic period. Due to their quite characteristic architecture, further reflexions as for the relationship of Idalion´s elites with neighbouring Kition and Tamassos are added.